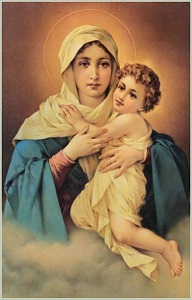 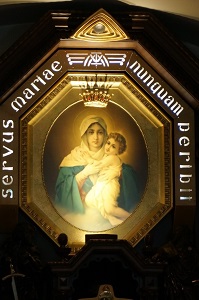 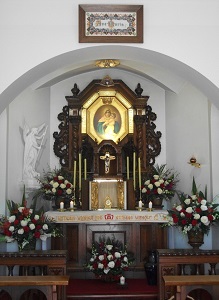 “Mother Thrice Admirable” is the title given to the Blessed Mother in her Schoenstatt Shrines. We see Our Lady as Mother of God, Mother of the Redeemer and Mother of the redeemed.

In addition to this historical meaning the title “Mother Thrice Admirable” can be interpreted in other ways.  First of all, the “Thrice” implies a superlative beyond count (not just once, or twice, but three times admirable!).  Secondly, the “ad­mirable” does not just say Mary is someone we can admire (“look up to”) but tells us she is also someone we can count on (“look to”) for help.

Fr. Kentenich further interpreted the title on many occasions to highlight important features of Mary and her mission:

2) admirable in her power, in her kindness and in her faithfulness (ibid);

3) admirable as daughter of the Father, Moth­er and bride of the Eternal Word, and vessel and shrine of the Holy Spirit;

4) admirable in her faith, love and hope, etc.

The origin of the MTA picture in the Shrine.

Schoenstatt did not have a picture for its shrine until April 1915, when one of the teachers in the school, Fr. Huggle, gave the students a lithograph print of a Madonna and Child in an octagonal frame.  He knew of their need, saw this picture in a shop, and purchased it as a gift for the boys for some 23 Marks.  It was placed in the Shrine on or shortly before April 30, 1915 and given the title “Mother Thrice Admirable” shortly thereafter.

The picture was one in common circulation at the time, known by the title Refugium Peccatorum (“Refuge of Sinners”).  It was painted in by Luigi Crosio (1835-1915), a prolific studio artist from Turin, Italy.  The Swiss firm “Künzli Brothers” contracted Crosio to paint this Madonna and Child for them in 1898.  They then made lithograph prints of the image for sale around the world as a devotional work of art.  Even before becoming associated with Schoenstatt, the image enjoyed modest popularity in areas of Ireland, Italy, Australia and the United States.  In the 1960s, the original painting (prototype for all prints) and copyright was purchased by Schoenstatt.